On game days, the narrow concourse that wraps around Nassau Veterans Memorial Coliseum feels like rush hour on the Long Island Rail Road. Thousands of people are trying to grab beers or take leaks or buy pucks during intermission, before the New York Islanders skate out for the next period. Beer bellies press against the backs of fretful usrents who desperately hold onto their young children. There is no shortcut through the dense crowd, no escape from the masses. There is only shuffling. 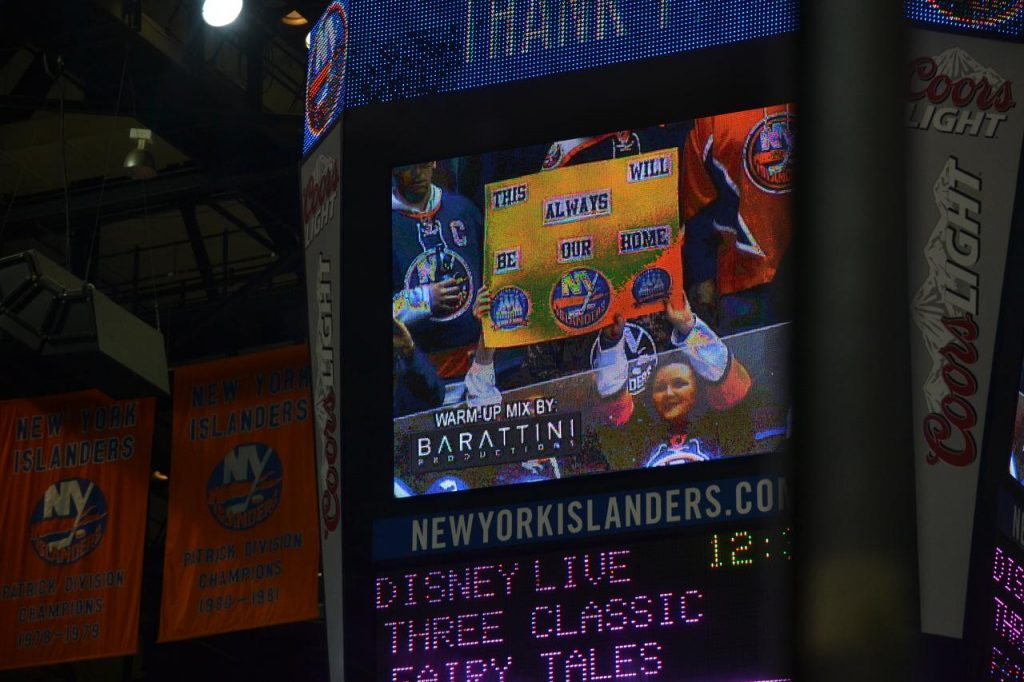 A lot of folks have grumbled about the jammed concourse, but I’ve always embraced it. There isn’t a lot of space to check smart phones, so visitors are forced to soak in perhaps the most provincial experience in the National Hockey League – the “Lawn Guyland” accents, the cries of Newsday pitchmen, the sight through the glass of seagulls on the plaza and drivers slogging through the notorious Long Island commute. As I walked through the concourse for perhaps the final time on Saturday, April 11, I tried to take mental snapshots so I could someday describe this scene to the wife I haven’t met yet, or my kids who haven’t been born yet, or anyone who will listen. I’m sad they’ll never experience it for themselves. I love everything about this arena, and I’m the only person to write a book about Nassau Coliseum.

Once the season ends, Nassau Coliseum will not be an NHL arena. The Islanders are moving west to the Barclays Center, the glamorous home of the Brooklyn Nets in an urban setting that is light years away from the Coliseum. I moved from New York to Ohio two years ago to pursue my doctorate, so Saturday may have been my last chance to see the Islanders play again in the arena where they belong, where I grew up. I can’t believe the team I love is leaving.

Friends have asked whether I will cry when the Islanders move. The Coliseum will remain for concerts, circuses, and maybe a minor-league hockey team down the line, but plans call for a drastic overhaul over the next year and a half with thousands of seats ripped out. Bottom line, the arena won’t look like it has for the past forty-three years of Islanders hockey. When the Coliseum opened in 1972, reporters compared the oval-shaped, off-white building to a loaf of bread, a mushroom, and a vanilla cake. The cake got a little crusty with time, but it’s still good. The Coliseum is the second-oldest arena in the league, a throwback to the great barns of the 1970s. It makes for an electric atmosphere.

The playoffs began this week and the Islanders’ performance will dictate the date of their final game at the Coliseum. All Long Island can do is wait. Wait to bid farewell to a team that makes their voices sore from cheering and their hands chapped from clapping. Wait to somehow move past a team that has brought a lot of joy and heartache over the decades. Wait to say goodbye to the team they adore.

By now, they are used to waiting in the concourse. They must be patient and stare at the names on the jerseys of the fans ahead of them, names in the Coliseum rafters, etched onto the Stanley Cup, and enshrined in the Hockey Hall of Fame.

No. 5, Denis Potvin, an original Islander who captained them to four straight championships and nineteen consecutive playoff series victories in the 1980s, a show of dominance that may never again be witnessed in professional sports.

No. 9, Clark Gillies. No. 19, Bryan Trottier. No. 22, Mike Bossy. The men who became the enforcer, the glue, and the pure goal scorer on a line known as the “Trio Grande.”

No. 23, Bobby Nystrom. Thirty five years ago, he clinched the Islanders’ first Stanley Cup with the most memorable goal in the Coliseum’s history. That transformed him into “Mr. Islander,” and put this region, this team, this arena on the map.

After an emotional video tribute on Saturday, the Islanders skated out to the same public address announcement that I remember from my first game in 1999. “Hockey fans, let’s hear it for your New pause York pause IIIIslanders!”

I looked around the arena and wondered whether these fans would follow the team to Brooklyn. Is this the curtain call for the older couple in Section 340 with personalized nameplates on their jerseys, “Big Jim” and “Sweet Sue?” How about the guy who presses that “Always Believe” sign against the glass in Section 118? Or the curious soul in Section 112 who wears a Ziggy Stardust-style gold wig and a “Rangers Suck” jersey tied around his waist, and flails his arms wildly when the home team scores? He has become as much a part of the game experience as the numbers in the rafters. Will Goldie bother to hop on a train to see the Islanders play somewhere that can only tenuously claim to be Long Island? (A cartographer may say that Brooklyn and Queens are geographically located on Long Island, but most New Yorkers define “Long Island” as only the easternmost, suburban counties of Nassau and Suffolk. I’ve never heard anyone from Brooklyn say they’re from Long Island.)

With its dedication in 1972, Nassau Coliseum symbolized Long Island’s arrival in the big leagues. New York City had an arena and a hockey team, Madison Square Garden and the Rangers. The Coliseum meant that Long Islanders wouldn’t have to leave the suburbs for top-notch concerts and sports. And the Islanders were proud to play the role. They wore blue and orange to match the Nassau County colors and a logo with a simple map of Long Island, not including Brooklyn. Many players lived locally, and fans spotted them in supermarkets and bars. When the Islanders clinched their first Stanley Cup in 1980, feisty goalie Billy Smith was asked about bringing the Cup back to New York, a reference to the Rangers’ last title in 1940. “The Stanley Cup is not in New York,” Smith shot back. “It’s on Long Island.”

The Coliseum is not in New York. It’s on Long Island.

New York is high-rise apartment buildings and pricey clubs and subway stations. Long Island is single-family homes and 24-hour diners and highway traffic. On Long Island, strip malls have sprawling parking lots; so does the Coliseum. Long Islanders can recite the lyrics to “Piano Man” in their sleep, and a banner honoring Billy Joel hangs in the Coliseum rafters. Now, in a cruel twist, the Islanders are movin’ out.

I wasn’t alive when the Islanders hoisted the Cup four straight times in the 1980s, and I wasn’t a hockey fan yet when they charged to the conference finals in 1993. I started going to games as a teenager in 1999, at a time when the Islanders were dreadful and the Coliseum was half-empty. No matter. I was captivated by the sounds of blades cutting into ice, the ferocity of the scraps, the finesse of the passes, the beauty of the goals. And I loved how the simple act of a rubber disc hitting twine could send thousands of grown men and women into spontaneous celebrations that would have been socially unacceptable almost anywhere else.

When the Islanders score at Nassau Coliseum, adrenaline seizes the fans. They high-five people they were flipping off an hour earlier on the Northern State Parkway. At other NHL arenas, goals are punctuated with gimmicks such as the firing of a cannon in Columbus, the nearest NHL city to my new home in Athens, Ohio. The Coliseum never needed them. The reaction is not artificial: We jump from our seats and we applaud and we scream and the sound bounces off the ceiling and back at us. We roar because we are Long Island and the Islanders are too.

Every now and then, I cue up the video from my most memorable moment as a fan in the Coliseum stands, when Shawn Bates scored on a penalty shot late in a playoff game in 2002. The Islanders hadn’t made the playoffs in nearly a decade, and all the pent-up frustration from the fan base came bursting out at once.

The Coliseum is where I sang along to Paul McCartney and the Eagles. It’s where I was once startled by the thud of lacrosse balls against the boards at a New York Saints game. It’s where I saw the New York Dragons set an arena football record by scoring ninety-nine points one night. And it’s where wrestling heels got a charge out of the crowd by shouting that Long Island sucked, a sacrilegious statement in these parts. One time, amid a chorus of boos, a solitary voice in the stands responded to a villain’s negative remarks about Long Islanders by shouting, “Hey, he has a point! We’re not so great!” Remember what I said about Long Island wit?

I fell in love with the Coliseum in high school. I made a miniature model of the arena for an art project, complete with real light bulbs on the lampposts. My childhood room is filled with souvenirs from Islanders games: a Bobby Nystrom bobblehead, pucks signed by Chris Osgood and Michael Peca, rally towels that are threadbare from being whipped around in the 2002 playoffs, and a Kenny Jonsson CelebriDuck. I don’t think I’d ever bought a present without parental supervision until I sneaked out to a Coliseum concession stand, purchased an Islanders tie for my dad for Christmas, and smuggled it into our house under my jacket. This past Sunday morning, I wore the same tie during a television appearance to discuss the Islanders’ final regular-season game at the only arena they have ever known.

Before the game, I talked to friends who were struggling over which jersey to wear at what could be their final night in the Coliseum. I decided to wear the first jersey I’d ever bought: a dark navy blue sweater, Mariusz Czerkawski, No. 21, with the four bars on the shoulder representing the four Stanley Cups. I saw other folks in jerseys with the 1980 Lake Placid patch and, yes, even the dreaded fisherman logo from the mid-1990s, which consistently appears on lists of the worst sports logos of all time due in large part to its similarity to the Gorton’s Seafood fisherman. It was like we were doing our best to honor a close friend at his funeral by representing all eras of Islanders hockey.

I won’t stop rooting for the Islanders when they move to Brooklyn anymore than I stopped rooting for them when I moved to Ohio. But I also won’t forget what the Islanders meant to Long Island, the real Long Island, the low-scale, suburban communities of Nassau and Suffolk that are nothing like the urban maze around the Barclays Center. A small part of me wishes the team moved far away rather than pretending they still represent what they meant to Long Islanders. The demise of the Coliseum represents a great suburban experiment that ultimately failed. Once the Islanders proved that Long Island could hold its own against the big city. Now they are moving to that very city. Talk about an identity crisis.

Soon the Coliseum will fall. Of course I’ll cry. Wouldn’t you?

Nicholas Hirshon is the author of the only book on the history of Nassau Coliseum, Images of America: Nassau Veterans Memorial Coliseum (Arcadia Publishing).